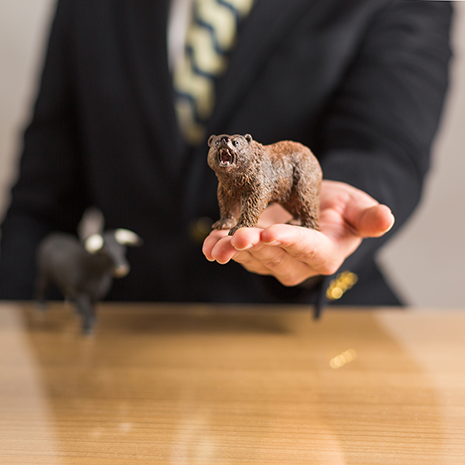 Investor worries overwhelmed fundamentals. A combination of worrisome factors—any one or two of which would normally be sufficient—drove stocks downward during the fourth quarter.

For stocks, the worst performance in a decade. Stocks retreated as sentiment shifted from tempered optimism to anxiety that earnings growth would evaporate.

Bonds benefited from flight to quality. Even as the Fed raised benchmark interest rates and reiterated its intention to keep doing so, investors sought safe-haven Treasuries. The 10-year Treasury yield closed at 2.68%, down 37 basis points during the quarter.

Convertibles lost ground. Not surprisingly, convertibles fared better than stocks due to their bond-like characteristics but worse than bonds because of weakness in their underlying equities. The Thompson Reuters All Cap Focus Convertible Index returned -7.5% in the quarter and -0.1% in the year.

Our strategies generally underperformed (see page 4 of pdf). Although we had adjusted our portfolios to weather a downturn, all of our strategy composites generated negative quarterly returns, and most did so for the year as a whole. Healthcare Opportunities and Convertible Arbitrage achieved annual returns that were both positive and significantly higher than those of their respective benchmarks.

LOOKING AHEAD: THE BIG PICTURE

Mixed picture portends a challenging year. The factors that sent investors to the exits in the fourth quarter remain the primary market risks as 2019 begins. Concerns about global growth rose after Apple reduced its Q4 revenue forecast in early January due to slowing iPhone sales in China—exacerbating fears that the Chinese economy is slowing down.

That said, we also see significant positives that could support a stronger market environment:

A strong December US jobs report—312,000 jobs were added, nearly double what economists had predicted—suggests that the US economy hasn’t lost steam.

It’s all about trade, rates and confidence. We believe that the economy’s directional movement ultimately will be driven by what happens with regard to three factors: trade, interest rates and investor confidence.

Confidence. The December Conference Board Consumer Confidence Index® results reflected a cacophony of crosswinds in which respondents felt good about the present but concerned about the future. Business confidence surveys were incrementally more pessimistic. Investors would like to see these sentiments reverse course.

Bifurcated outcome. We expect market activity in 2019 to follow either of two most probable scenarios, and are hopeful that conditions will become clearer as companies report fourth-quarter earnings over the next few weeks.

Volatility will likely remain elevated as these issues continue to weigh on investors, in our view. Given positive policy resolution and our belief that stocks are reasonably valued, risk assets could provide attractive upside. Lack of positive resolution, on the other hand, would likely expose risk assets to further downside.

WHERE WE STAND NOW

Rigorous stock selection. As always, we focus on innovation-driven, disruptive companies with strong management teams and bright futures. Our research shows that these businesses tend to generate earnings growth that not only outpaces most other companies, but also accelerates while doing so.

As a result, our portfolios are well-positioned for an environment in which growth is scarce.

Opportunities. We’re reinvesting in securities we previously sold  when their valuations exceeded our price targets and are now appealing after selling off.

Healthcare: oversold. We’ve reviewed our healthcare portfolios for vulnerability to a possible decline in access to capital. Our companies are in good shape and sufficiently funded for at least the next 18 months. In addition, we see the sector—which has a high percentage of non-earnings generators that investors shun when they derisk—as oversold. Upcoming conferences and clinical trial readouts could catalyze support for companies that beat expectations.

Convertibles: portfolio repositioning. We’ve repositioned our convertibles portfolios much as we did with our equities, by reducing exposure to certain sectors with extended valuations as well as to companies with highly leveraged balance sheets and/or greater equity sensitivity. Convertibles could benefit from a potential rebound in smaller-cap companies (which dominate convertibles issuance).

This coming earnings season will be telling. As of this report, 2019 has gotten off to a strong start. We believe that the better relative valuations and earnings potential for small-cap stocks creates more opportunity, especially as growth becomes scarcer and thus commands more of a premium.

Nicholas Investment Partners, L.P. (“Nicholas”) is an independent investment adviser registered with the SEC.  Registration with the SEC does not imply a certain level of skill or training.  The firm maintains a complete list and description of performance composites, which is available upon request. Policies for valuing portfolios, calculating performance, and preparing presentations are available upon request. Past performance is no guarantee of future results.  Current performance may be lower or higher than the performance presented.  This information is intended for institutions, consultants and qualified investors only.  No part of this material may be copied or duplicated, or distributed to any third party without written consent.

Nicholas does not guarantee the success of any investment product.  There are risks associated with all investments and returns will vary over time due to many factors such as changing market conditions, liquidity, economic and other factors. The value of investments can go down as well as up, and a loss of principal may occur.   Although Nicholas attempts to limit various risks, risk management does not imply low risk. All risk models are inherently limited and subject to changes in economic, political and market conditions, as well as changes in the strategies’ holdings, among other things, which could affect the risk profile of any portfolio managed by Nicholas. Small- and mid-cap companies may be subject to a higher-degree of risk than larger more established companies’ securities. The liquidity of the markets for these small and mid-cap companies may adversely affect the value of these investments.  Concentrated or sector strategies are expected to maintain higher exposures to a limited number of securities or sectors which could increase the volatility, market, liquidity and other risks of the strategy.  The use of leverage in any investment strategy may significantly increase these risks.

Some information herein reflects general market commentary and the current opinions of the author which are subject to change without notice. It is provided for general informational purposes only and does not represent investment, legal, regulatory or tax advice and should not be construed as a recommendation of any security, strategy or investment product. There is no guarantee any opinion, forecast, or objective will be achieved in the future.  The information, charts and reports contained herein are unaudited. Although some information contained herein was obtained from recognized and trusted sources believed to be reliable, its accuracy and completeness cannot be guaranteed. Unless otherwise noted, Nicholas is the source of illustrations. References to specific securities, issuers and market sectors are for illustrative purposes only.  Nicholas does not undertake to keep the recipients of this report advised of future developments or of changes in any of the matters discussed in this report.

Previous Catherine Nicholas Shares Her Career and Investment Insights with Students at UCSD Rady School of Management
Next Blockchain, Distributed Systems and AI in the Shared Economy 2019

Team NIC Rolls Up Its Sleeves at Local Beach Clean Up